Take a tour of Microsoft’s New England Research Lab with Dena Quinn, and there are many things the technology giant’s Senior Portfolio Manager will describe with beaming pride.

The six-floor global development center at One Memorial Drive — affectionately dubbed N.E.R.D. (New England Research and Development)— sits nestled in Cambridge amongst one of the world’s great centers of intellectual capital. And for that reason, Quinn’s mission three years ago was to develop an office space which would attract the next generation of technology talent.

“The workplace environment has been changing rapidly over the last few years,” said Quinn, who manages a portion of Microsoft’s east coast real estate portfolio. “You want to attract talent to an office that feels comfortable, that your employees want to come into and where there are things for them to do to get out of their own head and take a little break.”

A stroll through one of the office’s two multi-floor collaboration hubs serves as proof for Quinn's and Microsoft’s strategy.

The space features elaborately designed walls of tchotchkes — an illuminated moose head from Norway is one of her favorites. The office also has dining with views overlooking the Charles River and, a free-style Coca-Cola machine.

“Caffeine is a really important part of an engineer's daily life,” Quinn said. “They come in. They get coffee. They don't want to have to go too far from where their workspace is to get that coffee.”

Each floor features multiple ways to caffeinate staff, including the 150 different flavors of soda products. But while these amenities have been key to winning hearts and minds of potential employees, the office’s established development staff needed more convincing for some of the reimagined workplace.

“It's easy to put in a game room and a yoga studio, but it's not so easy to shift people's mindsets,” Quinn said.

For Quinn, the key challenge was evolving a workplace culture built around private offices to become team-based workspaces. The plan was to redesign the space around groups that worked together, needing direct collaboration and communications, all featuring teams of less than 16 workers.

The fear of long benching workstations, shoulder-to-shoulder engineers with no room to move and zero privacy is the first misconception Quinn had to battle.

“The reaction of coming from a private office to a team-based workspace was pitchforks and torches,” Quinn said. “The employees felt that they could not get out of their office. How were they going to make a phone call, eat lunch or have a private meeting?

“We really had to educate them along the way, and show them what their peers were doing at our corporate headquarters in Redmond, which was a little bit ahead of the curve on building team-based workspaces.”

Added Andy Cerat, a Senior Project Manager, “The initial response was pretty strong. People did not want to come out of their offices. But since we've moved in, people have loved the new space.”

Getting HR, leadership and the employees involved in the conversation

The positive reaction unfolded, in part, because the employees themselves had an active role in creating it. Quinn involved her leadership and human resources partners to develop workplace input teams, which helped the change management process. That also revealed opportunities to shift the project’s initial designs, leading to amenities like the freestyle Coca-Cola machine and more focus rooms for team collaboration.

“I can’t even imagine the space without those rooms,” said Cerat, referencing the added collaboration and meeting rooms. “This is our space. We have to come here and work everyday. As a remote site, we needed more areas for multiple people to get on calls, and that wasn’t part of the original design. The focus rooms have been tremendously useful for us.”

Adding a maker’s lab for experimenting and creating

That change was a simple one — relatively speaking — in comparison to one of the other additions implemented late in the project, The Garage. Probably one of the most notable features within the entire space, this employee innovation space wasn’t in the project’s original scope, but, after completion, is now one of the key elements of the entire office.

“I would really have to say, honestly, that The Garage program is really the thing that I'm most proud of,” said Quinn. “It speaks to how I intercepted an already in-flight project and built a program with great accolades. It was definitely something I've never done and probably will never do again. It's a unique program to Microsoft and we don't build them everywhere.”

So, just what is The Garage? It’s a “maker lab” where people can experience everything from making buttons to 3D printing and virtual reality. It’s a playground for creative adults.

“It's an opportunity for Microsoft employees and engineers to get out of their day jobs, and try new things, experiment, and learn,” said Linda Thackeray, who leads The Garage program. “The idea is that you learned from that experimentation, and then you take that back to the day job.”

The Garage is just one example, albeit maybe the perfect one, of the truly unique space Microsoft was able to develop with JLL’s help. In addition to The Garage, the space boasts two spectacular two-story hubs which serve as vibrant gathering places for the employees before, during and after work.

It’s the place you’ll see employees having lunch, quick meetings or engaged in an X-Box gaming session. All of it, for Quinn, has paid off because it produced the ideal employee experience for the developers inhabiting One Memorial Drive.

“I am really pleased with the way this project came out,” said Quinn. “When my peers come to visit, they look around and they go, ‘wow’. For me, it was a great accomplishment, probably, to date, my single largest accomplishment, and one that I feel really proud of."

“JLL was key to my overall success here both from the brokerage side and the project management side. They worked to ensure that all of the goals that I needed to meet were met and they were a great partner.” 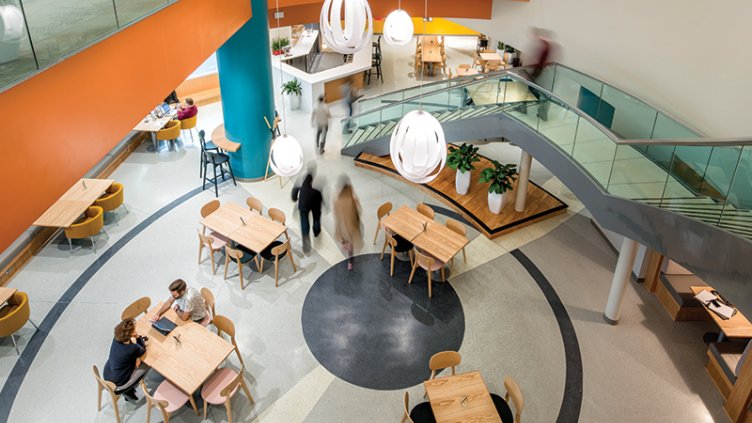 Creating a sense of community within a sphere