With office design becoming more elaborate in recent years as companies seek to stand out from the crowd, some firms are looking to take their cue from local culture.

From Estonian saunas, Australian Aboriginal gathering places, and American cookie time, many features reflect a company’s heritage as well as helping employees feel tied into that space, a crucial difference to the sense they could be in any city in the world.

The need to crack homogeny has never been more important for firms increasingly focused on wooing talent and standing out from the competition, says Scott McCrossin, managing director of project and development services for JLL Australia.

“A company’s workplace can be the most effective billboard to showcase its culture, its brand and its values,” McCrossin says. “Many organizations recognise human capital as their most important resource, and so their experience is everything. This makes endearing design not just about the type of workspace delivered, but also about how they interact within the space.”

One hurdle to office redesign projects can be cost, but getting the creative elements right can also be a challenge. Here’s how five firms have struck the right balance:

Australia’s largest energy company has undergone its first rebrand in 18 years and now operates by the motto ‘good energy’. And that’s exactly what its staff sign up for when they enter the yarning circle, in the company’s new office at Barangaroo’s International Towers.

The yarning circle is a centuries-old ritual for Australian aboriginals and Torres Strait Islanders, where participants are required to sit in a circle and communicate harmoniously. Indigenous people use this method to pass on cultural knowledge.

“This is a really innovative use of space that sends a message to Origin staff that the company values their ideas and is prepared to create the space to hear them. In the increasingly competitive world of energy, these design considerations make all the difference,” says Lauren Player, JLL’s change manager for Origin Energy.

Crucially, the yarning circle is a nod to the history of Barangaroo, which is named after an important woman in the local Aboriginal community, and the furniture was sourced from an Aboriginal supplier.

One of the key philosophies contributing to Toyota consistently leading global car sales rankings over the years is known as Genchi Genbutsu. One of a common set of principles, it translates to ‘going to the source’ and suggests that production workers make correct decisions and achieve goals by locating the origin of knowledge, facts or equipment.

Closely tied to this is the Japanese custom of nemawashi, a consensus-building technique essential for coming to a decision, or making change. It typically involves conversations one-on-one, or among a small group with the end goal being persuasion before a larger, more formal meeting. And they are often held in open spaces. Japanese offices are usually laid out so nemawashi and uchi-awase, translating to meeting, can be seen happening in the open at any time.

The billion-dollar startup, Transferwise, has built a sauna inside its London headquarters in a nod to the Estonian heritage of the company’s founders Taavet Hinrikus and Kristo Käärmann. It even comes replete with birch twigs to gently hit the skin to aid muscle relaxation. Staff are understood to use the sauna regularly, and the company also hopes the feature will appeal to potential recruits. “Afraid of the bad weather? Don’t worry, we’ve got a sauna in the office,” reads the company’s jobs page.

The American love affair with gooey-centred choc chip cookies has inspired a daily rite practiced by the tech brains who work at Level39, which is a coworking space for startups in London’s Canary Wharf. Every day at 3pm, two huge trays of warm cookies are brought out to the kitchens, which is signalled by the ring of a bell. It encourages workers to commune informally at least once a day, and maybe even conceive the next big tech platform.

ANZ bank has sought to provide a welcoming environment in its Sydney Chinatown branch to a predominantly Asian workforce and customer base, with a sophisticated modern design that is infused with Asian symbolism. In its latest renovation, ANZ and JLL’s project design team consulted feng shui master Hon Cheung to arrange plant life, furniture, colour and art to promote good energy, known as chi, and success.

A twisting five-story staircase which imitates the flow of a dragon winds its way from the basement to the top floor, while lotus flower, koi fish and dragonfly motifs decorate office signage.

“The Koi fish represents abundance, longevity and good fortune, and the dragonfly symbolises agility. We wanted to have that symbolism here,” says branch manager Peter Cai.

Another quirk is that the building doesn’t have a fourth floor, as it is considered an unlucky number in Chinese tradition. 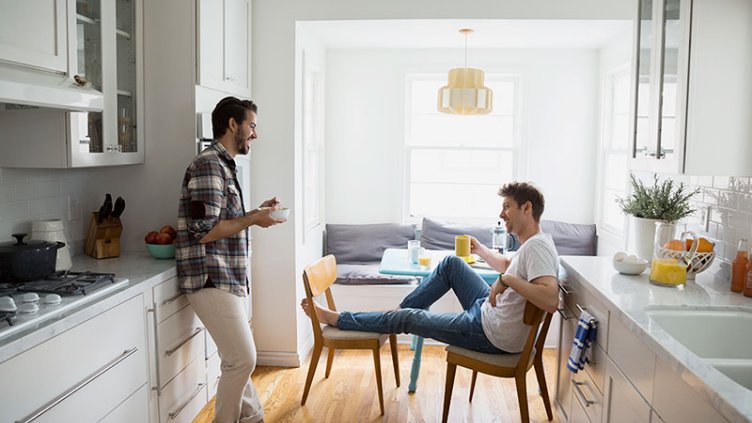